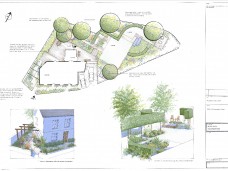 How to Design a Garden: Solving site problems and fulfilling the client brief. Example #1

by sophie Blog, How to Design a Garden

So, how does a designer come up with a design?

If they are doing their job properly, then it is a thorough process.  It certainly isn’t about approaching the project with a design in mind and making it fit the property.

First we identify problems and needs; next we come up with solutions to every single issue; and only then does the exciting bit — the drawing — begin. Here I explain one of our designs in a bit more detail, showing how the site problems were dealt with and the client brief met.

For the finished design, please see Contemporary Curves in a Family Garden, under our portfolio tab.

The Clients and Site

This property is in a small Oxfordshire village in the South of the UK.  Built from local stone of a pale buff colour, and red brick, the old house has typically been extended several times.  There is a level change of almost 2m, with the land sloping away from the house in a south to north direction, and also a lesser slope across the garden from east to west. 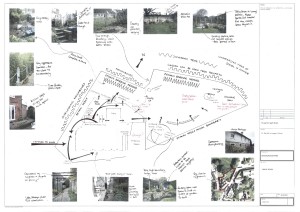 The site itself posed a variety of problems, and the final design was very much a response to these.  The client brief was fairly loose.  The owners (a professional couple with two teenage daughters) wanted a complete re-design of the whole site, but had few exact requirements.  Keen vegetable-growers, they had just taken on an allotment, so the existing vegetable patch could go, but some herbs on site would be appreciated. 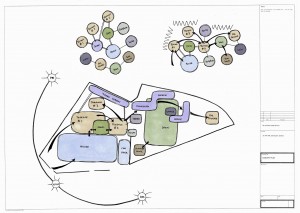 They needed a small lawn area for sunbathing, and the existing decking needed to stay (minor modifications permitted), as they regularly entertained, and wanted to be able to dine near the house.   The summerhouse had to be retained, as did any existing boundary hedges, as privacy was a big issue.   They were happy to take on additional help with maintenance, but enjoy gardening themselves.

Although the brief was ‘brief’, it was apparent that there were many opportunities to make the garden more practical for family use.  The front area of hard-standing was under-used, with room for only one car; and unattractive, with household bins filling a pathway that led to a disused door.  By removing the low wall that divided the area, it was possible to double the car-parking space, and create a hidden area for bin/bike storage. 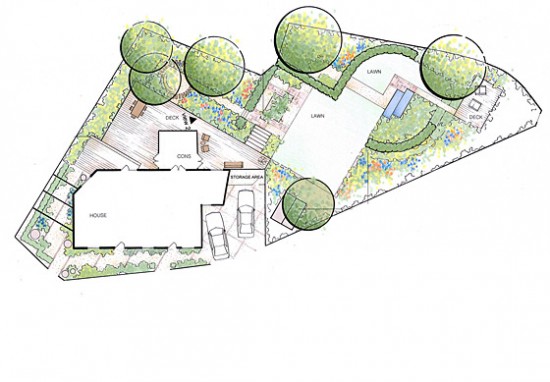 The design around the front of the house was kept fairly simple, with informal, easy-to-care-for planting.  The buff house walls and brick-red front wall are tied together by using brick detailing in the neutral-coloured gravel paths.  Three pergola beams along the side access add an overhead plane, and create a sense of entrance as you approach the garden.

Stepping up, the new, small decking platform forms a landing area, with access through double doors into the house.  The existing steps to the doors were too large, eating into the valuable entertaining area, so were reduced and re-shaped, being careful not to impede flow to and from the conservatory side doors.

The decking was one of the major issues with the garden.   It had to be retained, as the levels around the house made a raised platform necessary, and access was also needed around the conservatory, which had been built onto the middle of the house.  The original shape was most unattractive, so a re-design was vital, and the boards would be replaced.  It made sense to enlarge the deck to provide more usable dining space, and extend it over an existing concrete platform (north side), which would have proved expensive to remove.

In fact, creating a straight edge at 30 degrees to the house was key to making the site work.  The random boundaries at all angles, combined with the existing ‘eccentric’ decking layout lent a chaotic feel to the whole garden.  Simplifying the main deck finally gave a leading edge, from which the design could begin to move out into the garden.

I felt only one access route from deck to garden was necessary, and positioning this towards the east side of the deck created an opportunity to turn the woefully under-used corridor-like ‘courtyard’ area  into a secluded retreat.  It also created options (whether to turn left or right), which can make a small garden feel bigger.  The height differences in this part of the garden were turned into a plus, as a further flight of steps down to the courtyard adds to the sense of separateness and seclusion.   Privacy — an issue throughout the garden — was dealt with in this area by planting a small grove of Betula utilis var. jacquemontii ‘Doorenbos’.  A bespoke part-circle of chunky timber uprights introduces a key motif shape for the garden, and creates a secluded ‘den’-like feeling.  A birch underplanted with Stipa calamagrostis continues the line of the wooden posts, the upright, arching grasses reflecting the timber verticals, whilst softening what could otherwise be a rather intimidating structure.

Moving back towards the main garden, you come to a transitional zone, with brick and gravel paths.  Two shallow raised beds provide a sunny and accessible spot for herbs, and set up another key shape for the garden, which will be repeated and re-interpreted throughout the garden.

The lawn area had many issues.  Level changes were dealt with by creating a low curved retaining wall — re-using existing on-site materials — with planting on top and below.  Seriously overlooked from the north by a school, and public footpath, screening was desperately needed.  The solution was pleached hedging, using ‘Tilia Cordata Winter Orange’ for it’s wonderful winter colour (the deciduous stems wouldn’t be a problem as this end of the garden will be little used at this time of year).  By using curved hedging, rather than straight lines following the wall, the eye is drawn away from the boundary and into the garden.  The hedges also reflect the circular shape of the timber structure in the courtyard garden, and, surrounded by woodland inspired planting, create yet another secluded zone for relaxation.   Adding to this tranquil feel are two metal water troughs, which are left unplanted to reflect the changing patterns of the sky.

Having zig-zagged it’s way around the water feature, the path continues, taking you up some steps, and through a pair of timber edged beds filled with low, clipped box.  A raised deck at the end of the garden — framed by the pleached arcs when seen from the house — is ideally positioned to catch the last sunshine of the day.  With it’s easy chairs, it’s a tempting spot to enjoy an evening drink.

For the finished design, please see Contemporary Curves in a Family Garden, under our portfolio tab.

For a more detailed look at the design process, please see our Garden Design tab.

So, what do you think?  Did we successfully fulfil the brief and solve the site issues?

« Talk and Exhibition at RHS garden Rosemoor. » Do I really NEED a Garden Designer?

"It was such a pleasure to work with Sophie.....she listened to all we had to say about how we wanted our garden to work for our lifestyle"

Ready to get started?

Just use our simple contact form to get the ball rolling.

This website uses cookies to improve your experience. We'll assume you're ok with this, but you can opt-out if you wish.[ Accept ] [ Read More ]